A southern pied babbler on lookout duty in the Kalahari desert, South Africa.

Parents of millennials still living at home aren’t the only ones with children that refuse to leave. Many animal species have adult offspring that are slow to take flight, but when and how they leave has been poorly understood by scientists. Now, new UBC research on a desert-dwelling African bird is yielding some answers.

Martha Nelson-Flower, a postdoctoral fellow at UBC Faculty of Forestry, studied the behaviour of wild southern pied babblers, which live in family groups of up to 14 in the Kalahari Desert in South Africa. Her findings, published in the Journal of Animal Ecology, suggest that better prospects elsewhere, as well as family dynamics between brothers and stepfathers, play a big part in determining when offspring disperse.

A southern pied babbler perched high in a dead tree in the Kalahari Desert, South Africa.

Nelson-Flower used 11 years of data to investigate how the dispersal of male and female babblers was affected by their position in the group social hierarchy, conditions in the environment, and the benefits of staying in their group. She discovered large distinctions between the sexes. Female birds were more independent, but tended to remain at home when in a larger (and therefore safer) group. In contrast, males left only when they had improved chances of leading a group of their own elsewhere. 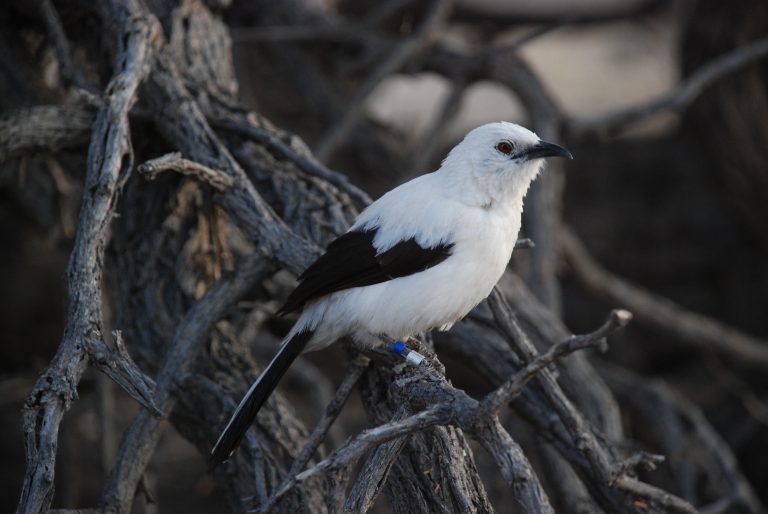 However, a male’s position in the group social hierarchy made a big difference to their decision to disperse. Brothers queue for an opportunity to inherit the leadership of their group, or that of a neighbouring group; by leaving early, younger brothers could boost their queue position and improve their prospects. Intriguingly, males with step-fathers also left early, likely because step-fathers prioritize their own, younger sons in the queue.

In contrast, females lower in the pecking order did not leave early, but bided their time, waiting for opportunities to overthrow dominant females in other groups. Nelson-Flower suggests this may be because they sometimes achieve dominance through extreme aggression: “A large, subordinate strong female would go to a group with a dominant female, and attack that female until she left. Sometimes sisters would come in pairs, and they would work together.”