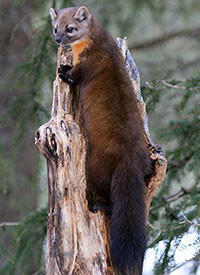 Dr Sullivan received the award in recognition of the outstanding contribution made by his HCTF-funded project, Enhancing Marten and Weasel Habitat on Clearcuts. The project examined whether debris from clearcuts shaped into windrows could provide important habitat for small mammals, thereby mitigating some of the impacts of this forestry practice. Learn more about this project on the HCTF website.